👉 To understand the underlying technology and concepts powering this precursor A.I project, be sure to check out the Just.game Official Whitepaper.

Just.game is a precursor A.I that creates a toy economy around hard and soft economic lures including:

The core is built to be self-decentralizing, and actions players take to benefit themselves also forcibly make the project grow in size, scale and reward for everyone participating.

❗👉 Be sure to check out our Game Mechanics for an in-depth look at how all the pieces of this project fit together.

Yes, this is an entertainment service that does not falsely mislead participants. It does not use any form of random chance or odds on-chain and instead all actions are a direct result of player skill or choice.

The service provided is the internal element of an A.I managed decentralized organization that cannot be corrupted, and thus does not defy codified laws it was written to follow.

Can I trust this project?

Just.game will completely and exactly promise you only what it can guarantee. It will ensure that you are never given incorrect information about what it knows, and will strive to ensure the most generous result for every player.

There is no secret manipulation of assets in the background, you are not seeing artificially inflated transactions, equations, engagement rates, or misleading statements. You are actively encouraged as often as possible to learn more about the service before engaging. This engagement sustains the service and makes it possible in the first place.

The only exception to this would be a hack of the security of the code or platform itself. This would compromise what the game is able to provide against the original intent of Team JUST and should be understood as a constant risk of engagement with a financially programmed product. Team JUST has taken extensive precautions to program methodical safeguards and systems intended to minimize the risk of any such breach of security.

What happens if the main site goes down?

While the actual game itself is powered entirely by immutable code on the TRON blockchain and cannot be taken down, the just.game site could go offline temporarily. If that happens, don't worry!

You can access @minnow's curvy backup page: https://wonnim.github.io/curvy-backup/ or check out out guide to reading and writing from the game contract using TronScan.

No matter what happens with site outages, you'll always be able to interact with the game and purchase more boxes.

Here is the basic game setup:

Once the reboot prize has been awarded and the current round ends, the whole process begins again with a new round and a reboot prize rolled over from the previous round.

What’s the minimum I can send in to receive boxes?

The minimum TRX to send to receive boxes is always 25 TRX. However, as the round progresses and boxes get progressively discounted, you’ll receive more boxes for your TRX!

When should I open my boxes?

Gift boxes can be opened up by their owner at anytime, and when that occurs before the end of the round, the participant receives twice (2x) their stated value. When a box is opened, it is destroyed, never to earn revenue again. However, note that this is all or nothing, if you open boxes, you open them all.

However, be sure not to open your boxes until you are ready to fully exit your current game position with the 2x value as shown. Opening boxes, deposits 2x the current value of your boxes into your TRX wallet, but then destroys all boxes. You would generally want to be conservative on opening them because royalties will continue accumulating in them upward as long as the round continues.

For example, if you saw that the value in "Earnings" was 1000 TRX such as: 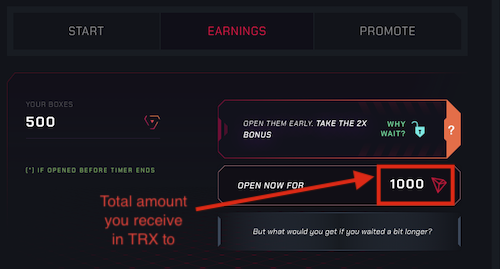 This would mean the total amount of TRX you would receive is 1000 TRX, and then all boxes would be destroyed, and you would exit the game.

In other words, do not open boxes until the amount you see in the 2x value is the amount you want to totally cash out of the game with and stop receiving any future royalties. Not to mention, during "glitch" events, all unopened boxes will receive additional bonus royalties as well.

How does re-investing boxes work?

Players can compound 2x the value from their boxes anytime during the round, temporarily resetting their existing boxes value to zero and increasing their number of boxes even further. Re-investing also puts you back into the last 100 participants, for a renewed chance at the reboot prize.

Players can opt-in to have their royalties automatically re-invested on their behalf, for no fees, causing their boxes to compound on their own. This can be enabled or disabled anytime. Note that this system is powered by other people running special programs to process the autoplay reinvests, so this might take a few days to become reliable.

When does the timer increase back up?

The timer increases every time one or more boxes are purchased by 2 minutes plus 30 seconds per box. For example, if you purchased 10 boxes, then the timer would increase by an added 7 minutes (2 minutes plus 5 minutes).

What is "the glitch"?

A "glitch" bonus triggers when the timer drops down to a certain level, distributing a bunch of royalties across every box that is unopened. Participants who open boxes before the glitch has triggered never get a piece of this prize. The glitch becomes a reward for those players who stay the longest.

Once a glitch reward is distributed, the next consecutive glitch requires a far lower threshold than the one before. When a glitch is triggered, boxes are then available at a significant discount following the glitch, between 25-75% depending on the glitch. This discount applies for all boxes including through reinvests.

🎥 Prefer to watch? Check out this video explainer on the Glitch by user @YKnot

How long do rounds last?

The timer starts at 12 hours and is counting down towards zero. Every time a participant engages with the system by purchasing/reinvesting boxes or opening boxes, the timer is increased back upward by a fixed amount. When the timer reaches zero, the round ends and the reboot process is initiated. This includes paying a prize to the last 100 buyers, and opening up all existing boxes and sending the royalties to the box owners.

Is there a delay before a new round starts?

There's no delay between rounds, the next round is immediately started. Autoplay will also technically auto-buy boxes in the next round for players that have it enabled.

How do I earn during this game?

Royalties. You start earning royalties as soon as you acquired boxes. Boxes start with no royalties, and then accumulate royalties on every single box created after that. During a glitch event when the glitch timer counts down to zero, you earn even more royalties.

Reboot. At the end of the round, when the countdown timer reaches zoro, if you are one of the last 100 people to get a box, you also earn 1% of the total Reboot Prize!

How does the promotion/affiliate system work?

Jump to the "PROMOTE" tab to get started: 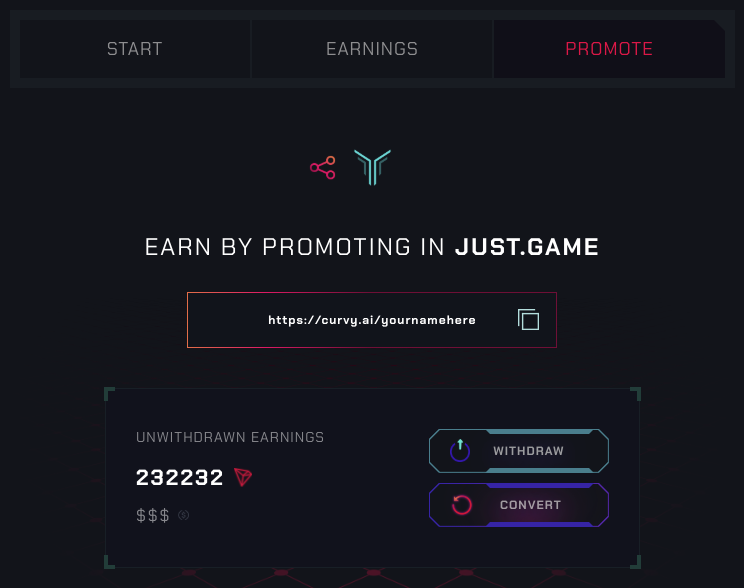 Aggregating the most common questions about Just.game gameplay mechanics:

What are the three big stats at the top of the game?

When do my existing boxes increase in value?

Giftboxes increase in value starting from zero, and continue accumulating royalties within them from the point they are created anytime additional boxes are purchased or upgraded. The fewer the giftboxes there currently are in total, the more royalties each box will accumulate.

What happens when the countdown timer reaches zero?

Once the cycle timer reaches zero, a reboot sequence begins:

How and when can I claim my loyalty points?

Loyalty points are granted to players every time they acquire a new set of boxes. Loyalty points can be spent in any cycle after the one in which they are earned. When available, loyalty is spent automatically, multiplying all gifts you acquire by two (2x) until that loyalty bonus has been fully spent. These extra boxes as acquired also earn you additional loyalty as well, which can then be used a future cycle.

Loyalty points cannot be withdrawn. They can only be used for accumulating extra boxes.

How much is a promo link?

Can I register multiple affiliate tags with one account?

Yes! Register as many promotional tags as you want. Only the most recent one you register will show up on the UI but all of them can be used to promote.

What does the number in the hexagon in the top left corner represent?

Yes, you spend more TRX but you get 2x the number of boxes when loyalty points are spent.

Can you withdraw your referral earnings without opening your boxes at the same time?

Note though that reinvesting the affiliate royalties also reinvests your boxes.

I would definitely appreciate if you purchase giftboxes using my promoter link. Thanks for reading! Reach out to me anytime on Discord @Cryptoknight.